…that was refreshing, and worth. Let not the strange stench bother you. It is this black piece of soap I have found at the church tap and used to scrub by face with. Smells horrible, I agree, but way better than that fish in Pastor John’s mouth –he ate it a week ago.

Anyways, you were asking what miracle this is that has transformed the Suffering son of Mwobithania into a Suffering son of Christ. Well, the miracle is yet to happen. But Pastor John promised it would and men of God do not lie. I know this because he has never failed to keep his word on pay for the many years I have done casual work at both his home and church.

But allow me to tell you where the miracle business began.

Earlier today, I arranged a meeting with the pastor by milling around the path he faithfully takes each Sunday to his church,  Sodom and Gomorrah Not Again in Jesus Name, or SG in short. My mission was simple, borrow an advance on any future work that I may do for him because I was awfully hungry.

The pastor listened faithfully to my 20-second pre-begging speech on how this particular January had been tough and how February has turned out even harder. “Tougher than my last meal, three days ago, of a poorly boiled piece of cow hide,” I told him.

By the time we got to the church gate, I was ready to denounce the terrible life I have lived for thirty or so years in exchange for an eternally sated tummy

But instead of dipping a hand in his pocket and banishing my starvation with a note or two of Mama Ngina’s boyfriend, the bugger started a lecture on silver, gold and other things he didn’t have, stuff that I could generally not eat, as we walked towards the church.

“But what I can give you will fill your stomach now and forever,” it was a magical line, this that he added. All my attention was now safely folded and tucked inside the shiny brown carry-bag swinging from his right hand. Even my tummy had stopped the rumblings to listen.

“The Word of God is more filling than bread…” he said as we walked, his free hand resting on my shoulder. The mention of bread sent my empty tummy into a frenzy of thunderous protestations. We both ignored it.

Getting saved and believing

By the time we got to the church gate, I was ready to denounce the terrible life I have lived for thirty or so years in exchange for an eternally sated tummy. All I had to do, the pastor had said, is get saved and believe.

And I did get saved including adopting the confounded Nebuchadnezzar name. But I am still terribly hungry. So I am reckoning that the believing part is the problem. But I have no friggin idea how to believe. In fact, I have no clue what in the world I am believing. But I will do it anyway.

“I, Nebuchadnezzar son of Mwobithania do believe whatever it is I am supposed to believe. Hunger now go away, Amen…” That should do it, I tell myself as I listen keenly. Gosh, I can’t believe it. Hungrier than a Standard Five kid at 11am, whose lunch box is packed with chapatti and meat stew.

I have decided to consult Pastor John on the problem as soon as I get the chance. But right now, I am distracted by this movement at the front of the church. There is a bloke in a yellow Kaunda suit and he just retrieved a glass jug from a cabinet hidden behind a white cloth. The white material has a huge red cross on it. But that’s not what is robbing my attention. The jug is, or rather, its content.

Kaunda suit has placed the booze on the dais before Pastor John, who is now mumbling to himself, his palm placed on the covered jug

The jug is partially covered with a purple cloth which has a white cross on it. Every piece of clothing seems to have a cross of one colour or the other here. Very interesting.

The dark-brown liquid inside the jug is well visible. It could be anything; from strong tea, to black coffee to my favourite spirit Kane Extra. I suspect it is the latter. My buddy Masengele from Kitui once whispered that churches dip bread in alcohol before feeding the congregation. Securements, I think is what he said the breads are called.

Kaunda suit has placed the booze on the dais before Pastor John, who is now mumbling to himself, his palm placed on the covered jug. He looks like a mad man. A sweating mad man.

Another fellow is approaching. He has placed a shiny, aluminium mug, the size of the large Sh55 keg next to the jar. Pastor John now pours a little of the broth in the mug. It’s now in his large mouth. I am doing the swallowing.

I didn’t see Kaunda suit leave the stage. He is re-emerging with a bowl brimming with crisps.

What you just heard is not a roar of drums. It is not thunder either. It is my silly tummy getting excited by the presence of edibles. It wants some.

The pastor is uttering words that have absolutely no links to ‘come eat’. Still, people all around me are moving towards the front, lining up in front of him. My processor is unusually slow. Perhaps it’s the hunger. Perhaps it’s because I can’t seem to get my stupid lookers from the glass jug sitting on the pulpit.

Presently, it dawns on me that Pastor John had rung the lunch bell –in coded language. That was enough.

By the time he placed a crisp in the mouth of the third person, I was two people away in the long queue. I will apologise to the elderly bloke I nearly knocked off the walking stick as I cut in front of him later, I have decided. First, I need to munch on the niceness in the pastor’s bowl.

My impatient yapper is already open. After a wait that seemed longer than four weeks in Industrial Area jails, it is my turn and I step forward. I am watching as pastor John picks a single piece of crisp and dips it in the aluminium mug. The hinges of my mouth are creaking from the strain. I can smell booze. I am happy.

I am following the piece of niceness as it travels through the air towards my eager chewers. I can’t wait. 10 kilometres, three, two inches…and the journey stops, abruptly. The tiny meal is suspended two inches from my kisser, teasing me.

The haze in Pastor John’s eyes seems to be clearing in recognition. The torment is too much. Snap at the meal, is what I’ve just done. The pastor was a tad slow. He is now squealing because his fingers are half lost in my mouth. They are spoiling my meal so I spit them out and leave the queue savouring the majestic taste of chapatti dipped in Kane Extra.

The preacher man has stopped feeding the people. He is talking about bodies and leavers and explaining that the securements are not for everyone. I dig my elbow into the ribs of the fat guy kneeling to my right mumbling stuff, his chubby hands covering his plumb face and ask, “Very selfish, don’t you think?”

He glares at me and continues to mumble. I think he is selfish too.

Pastor John has gone back to feeding the people. He is blowing his fingers occasionally –and glaring at me. I am wondering if I can get a mask and line up again.

But the line is gone and the pastor is draining the remnants of the cup. Lucky bugger, I think and wonder if I should become a preacher man once I hack this salvation business.

But the preacher man is now summoning the newly-saved to the front of the church for what he says is laying bare the past. He wants us to confess our past sins so that we can be forgiven and begin the new life on a clean slate.

“You are in the presence of God so don’t keep anything from him,” he is shouting in the microphone. I am baffled. Why would God want us to tell him our terrible deeds yet the pastor said He knows all we have and are yet to do? I want to seek clarification on that. I don’t.

Instead, I take a swift mental trip down my past. I don’t need to go very far before I turn round. I have seen enough and come back convinced it will be catastrophically unwise to revisit it in company of anyone.

“Tell it all…” pastor John is spitting.

I am frowning in confusion.

“Are you sure about that pastor?” I summon his ear close to my mouth and ask.

The microphone was also listening and broadcasts the question to the congregation and beyond. There is a sputtering of laughter.

The man of cloth has launched into a minute-long tirade about baggage, needles, camels and eyes. I can’t relate any of them to the current situation and I’m beginning to question his sanity. Must be the Kane Extra, I reckon and decide the bugger is high.

“Face the person you wronged, confess and ask for their, and God’s forgiveness. Confessing shows sincerity and the blood of Jesus will wash away the sins, leaving your heart shining like a new sufuria,” pastor John is saying.

My tummy has taken the mention of the cooking utensil as a cue to take over the conversation. It is now rumbling its confessions in a string that’s threatening to drown the speakers. The explosions have also reminded me that I need to get to the believing part faster. I want this silly stomach silenced and fast.

But I can’t seem to shake that feeling that salvation or not, some stuff should be left unconfessed. But then again, I am thinking, these church fellows must have been doing this even when Nebuchadnezzar was king. Surely, they must know what they are doing…or do they?

I’ll see you in a short while, tell you how it all goes down…

How Mugechi lost his head, and nearly his penis in the same minute 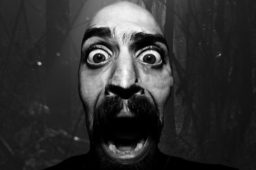 Horror at the funeral of Elder Makathimo’s bully son